21st Amendment Brewery is offering a $75 bounty for a San Franisco Bay Area resident turning 75 on December 5, which is the 75th Anniversary of the repeal of prohibition. In addition, they are offering a $25 bounty for someone turning 21 on the same day. The birthday boy(s)/girl(s) will lead a We Want Beer! March on Friday afternoon, Dec. 5, at 4:00 p.m.

“The Repeal of Prohibition is near and dear to our hearts,” said Shaun O’Sullivan, Chief Hop Head for The 21A. “We don’t usually need an excuse for a party, but this is such a good one that we’re having a parade, too.” 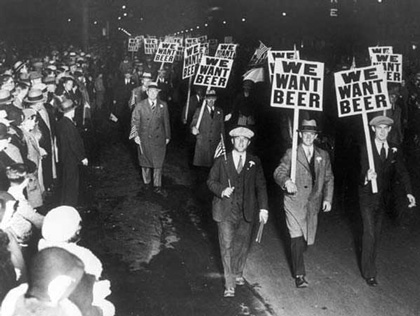 The We Want Beer! March will begin at 4:00 p.m. at Justin Herman Plaza (1 Market St, at Embarcadero) and end at 21st Amendment Brewery, located at 563 2nd Street, San Francisco. The pub will be transformed into a prohibition-ending celebration, complete with a speakeasy in the mezzanine that will require a password to enter.

Potential Grand Marshals must be able to provide proof of their December 5, 1987 or December 5, 1933 birthday, and they’ll need to provide their own transportation to the march. “But we’ll help them get home safely after the party,” he said.