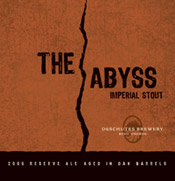 – Deschutes Brewery continues to experiment with barrel aging, making an imperial stout called The Abyss its latest Reserve Series release (Mirror Mirror, an oak-aged barley wine was the first). The Abyss, 11% abv, is available in wax-dipped 22-ounce bottles and on draft at select establishments.

– Denver-based Flying Dog gives us an early heads up on 2007 releases. These will include will include a new summer seasonal, two Wild Dogs and a new addition to their high gravity series, Double Dog Double Pale Ale. Double Dog, 9.5% abv and 84 IBUs, will be sold in four-packs beginning in April. The first Wild Dog release will be a “whiskey barrel-aged” version of the popular Gonzo Imperial Porter, and is due to hit shelves in the early Spring. The beer has already been brewed and transferred into used whiskey barrels purchased from the neighboring Stranahan’s Colorado Whiskey Distiller. Plans are still being put together for the brewery’s other specialty releases to round out 2007.

– Oskar Blues in Lyons, Colo., has made Gordon its third year-round release. The 8.5% Imperial IPA was sold in hand-labeled cans last year. “The hand-labeled cans of Gordon we did last year got a bunch of big beer lovers really excited,” saids Oskar Blues founder Dale Katechis. “So we decided to put it in an official can, and work it into production throughout the year in some small fashion.”

Gordon is brewed in tribute to the late Gordon Knight, who founded several Colorado microbreweries. He lost his life in a 2002 plane crash while fighting a fire outside of Lyons, Colorado. “Gordon was a uniquely ambitious and giving man, and a hero to many of us here in Boulder County,” said Katechis. “He lived a very big life and loved big beer, this beer is our way of honoring him and how he lived.”