NEW YEAR, NEW BEERS!
Coming in hot! Bear Republic is starting out the new year with a bang and bringing back one of their most requested, OG beers of all time, Hop Rod Rye IPA. 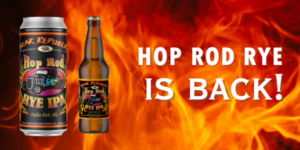 “I am VERY excited to see a return of Hop Rod Rye. Before I started brewing for BRBC I was a pub regular, and this was my go-to ale. Bursting with classic Cascade, Columbus, and Centennial aroma and rich maltiness, this original Rye IPA is one of Bear Republic’s greatest creations.” – Brewmaster, Roger Herpst
Want to get your hands on Hop Rod Rye? Visit their Lakeside Pub to get fresh pints, crowlers, and cans.
Hop Rod Rye will be hitting general distribution in early February and will be included in the new Bear Republic Variety Pack!