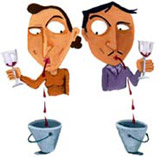 Craft beer sales have been so strong of late that we headlined a story in this space a couple of months ago “No news here.”

So why did SABMiller CEO Graham Mackay say the craft beer surge is going to fade (“It’s inevitable”)? We suspect he didn’t mean craft beer is going away, or even that sales won’t continue to grow. He was talking about how long these levels can be sustained. And, honestly, we should accept the fact that the growth rate has to slow sometime – and not act then (as many did in the 1990s) like the sky is falling.

On the other hand there is little reason to respect the “Beer in the Headlights” article that appeared in the high circulation online magazine Slate.

Here are the rebuttals from the beer blogosphere:

Beer Is Dead, Long Live Wine (Jay Brooks) and a followup
How do you overlook 100 million cases of beer? (Stan Hieronymus)
Pastoral Nostalgia or Blue Collar Chic? Enough of the Beer vs. Wine Debate! (Jess Sand)

2 Replies to “Are we all wrong about craft beer?”