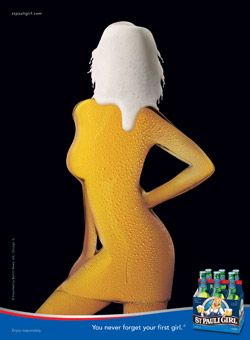 The St. Pauli girl has a different look in a new advertising campaign for the German beer.

St. Pauli Girl’s new national print advertising campaign features sophisticated, sexy, yet recognizable female forms that morph into appetizing beer images. Each image in the campaign brings the brand “to life” with maximum stopping power in the magazines that the ads are scheduled to appear. Furthermore, the campaign’s visual treatment reflects one of the Brand’s core equities by extending the appeal of the St. Pauli Girl posters into print advertising in a new and collectible way.

“The experience consumers have with the St. Pauli Girl brand is personal,” said Bill Eisner, partner at Nonbox, the agency that developed the ads. “We wanted to create a visually and emotionally appealing page where they were allowed to fill in the blanks with their own experiences.”

The tagline for the campaign is “You Never Forget Your First Girl.”

4 Replies to “A different sort of St. Pauli girl”