Keoki Brewing, in Lihue, on the Island of Kauai, and Mehana Brewing, in Hilo, on the Big Island, have announced that they will merge to form one company. The new entity will be called Hawai’i Nui Brewing, which means “great Hawaii.” The merger is expected to be completed by the start of of 2009.

The Keoki label will become Hawai’i Nui, but will continue to be marketed as Keoki in Japan. Mehana, as the only Hawaiian bottler, will begin bottling Keoki beers, which were being bottled in Beerman’s Beerworks, located in Roseville, California. Both breweries have 15-bbl systems. Keoki also currently produces all the Hawaiian draft Primo beer for Pabst, who owns the label. 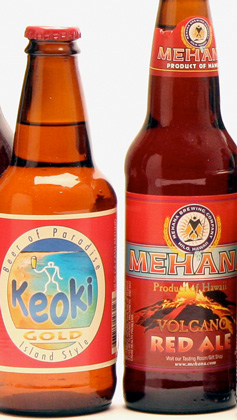 According to the Honolulu Star Bulletin:

Keoki, which has five styles of beers, will be adding a third bottled beer — an island-style English brown ale called Hapa Ale — to its lineup next year. Mehana makes about a half-dozen bottled beers, all of which will be retained.

Today is the day. Get out there and vote! Regardless of which beer … er, candidate you prefer, the important thing is to participate in the process. If you do nothing else today, at least cast your ballot and register your choice for the future of your country. Vote! 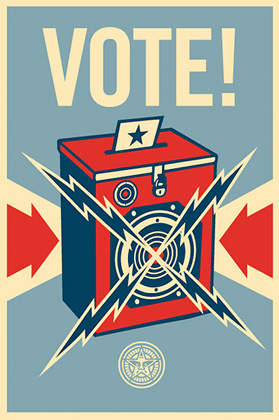 The last piece of the puzzle is in place to meet Rogue Ale’s ambitious goal to create an all-Oregon beer for Oregon’s sesquicentennial next year (150th year of statehood).

It all started earlier this year with 40 acres of hops planted at Rogue’s hop farm in the Willamette Valley. The last domino was put in place 3 weeks ago, when 122 acres of winter barley was sown in Tygh Valley soil (the only malting barley being grown in Oregon). After next summer’s harvest, Rogue will have their own Oregon hops and Oregon malt to combine with their exclusive yeast (made by Wyeast in Hood River Oregon) and, of course, the free-range coastal water they’re famous for. Put it all together and you have an all-Rogue, all-Oregon, beer.

The idea evolved from the company’s decision to grow some of its own hops last year. “We never set out to be farmers,” Brett Joyce, President of Rogue Ales, said, “but as an Oregon brewery we think it’s important to support our state, and to make products that come solely from our state.” Joyce admits the project was no economic benefit to the company: “These may be the most expensive hops and barley we’ve ever used,” he said, “but it sure is fun.” 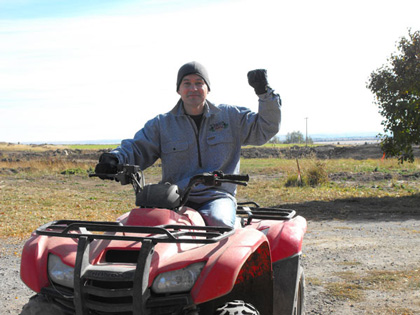 The owner of the Tygh Valley farm, located 30 miles south of The Dalles, is Dr. Jim McAllister of Portland. “I describe him as a neck surgeon with a farming problem,” said Joyce. “He’s a neck surgeon out at St. Vincent’s, but he grew up on a farm in South Dakota. He’s owned this farm for 30 years, and keeps building on it, adding acreage.”

The winter barley, planted three weeks ago, is now about three inches tall. In addition, Rogue plans to expand and plant an additional 103 acres in spring barley in April for harvest in July. 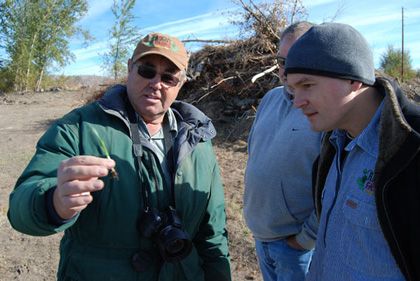 Like the Hop Farm, Rogue plans to set up a webcam so members and fans of Rogue Nation can check in from time-to-time and watch the crop grow. Rogue plans to offer tours at both farm locations. “Most people have seen vineyards and have been to tasting rooms of wineries, but I don’t think many have been to a barley farm and seen the agricultural part of the crop,” Joyce said. “People like seeing where things come from.”

After harvest, the barley will be shipped to Great Western Malting in the Portland area. From there, the malted barley will be sent to Rogue’s main Brewery in Newport, where it will be kept in a separate silo, awaiting its role in the new brew.
What’s it going to be? “We’ll let our brewmaster (John “More Hops” Maier) practice his art,” said Joyce. It’s his job and his creation; he’ll decide what the beer is going to be. We have no input on that at all. We say, ‘John, here’s the barley, here’s the hops. Just tell us what it’s going to taste like and what it’s going to cost and let us do the rest.’ That’s how we do it at Rogue.”

Additional pictures of the Rogue Barley Farm Fieldtrip can be found on Fickr.

Beginning today, once again the Real Beer’s Holiday Blog goes live. Over the next two months we’ll try to highlight all of the beer-related holiday beers, events and gift ideas that come our way in the hopes of making your holidays this year as enjoyably beery as possible. Check out the 2008 Holiday Blog on a daily basis through the end of the year. 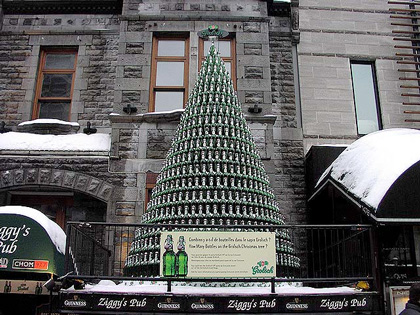 This Grolsch bottle tree was seen at Ziggy’s Pub in Montreal, Quebec, Canada.