Everywhere you look, companies are going green, and breweries are naturally leading the way. Japan’s Saporro Breweries will put a carbon label on cans of its Black Label draft beer. The new label will list how much carbon dioxide is emitted per can during the entire production and disposal process of creating the beer.

Using standards being developed by the Carbon Trust in Great Britain, Sapporo will wait until the Japanese Economy, Trade and Industry Ministry decides how best to adapt the standards to create rules for calculating CO2 emissions for labeling purposes before adding the information. The Japanese government is expected to make their ruling as early as February or March of next year.

You probably read about the recent travails of Mt. Shasta Brewing Co., makers of Weed Ales. Their crowns — the bottle cap on their beers — reads “Try Legal Weed,” which is funny because it’s brewed in the northern California town of Weed, which was named for an actual person: Abner Weed. Well, the federal TTB (Tax and Trade Bureau) wasn’t laughing and told the brewery they had to remove the language because it violated their vague standard prohibiting drug references. You can read Weed’s version of the events here, and it was covered by a number of news outlets. 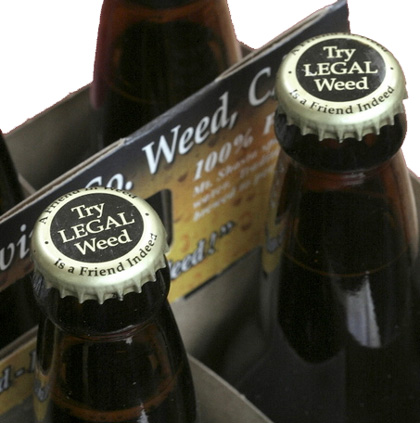 Today owner Vaune Dillmann announced that the TTB has reversed their decision and “Try Legal Weed” can once more grace their bottle caps. Dillmann shared the registered letter he received with the Associated Press earlier today, which stated.

“Based on the context of the entire label, we agree that the phrase in question refers to the brand name of the product and does not mislead consumers,” said the letter, dated Thursday.

In a letter to the hundreds of supporters who reached out the brewery, Dillmann added. “Weed fought the law and Weed won!”

Ghost River beers will soon be available in area bars and restaurants, as the new brewing company prepares to launch three new, locally-brewed, craft beers and one seasonal beer into the Memphis market.

“We believe the efforts of Steve and Gene Barzizza at Southwestern Distributing have helped expose the community to fresh, flavorful beer. This interest has expanded the market’s potential to support a local, craft-brewed beer,” says Chuck Skypeck, head brewer and co-owner of Ghost River Brewing.

It seems fitting that Oregon’s biggest annual beer event, The Oregon Brewers Festival, is preceded by a small gathering at Portland’s Rogue Ales Public House, where Fred Eckhardt schooled and entertained a sold-out crowd of enthusiasts on beer, cheese, and delicate art of milking a manatee.

A generation of brewers and beer enthusiasts cut their teeth on Fred Eckhardt’s writings on brewing and beer styles. His nurturing support of Oregon brewers like The Widmer brothers, Karl Ockert of BridgePort, and John Maier of Rogue Ales, to name a few, has helped make the Oregon beer scene what it is today.

A Beer and Cheese tasting may sound like an extended-pinky event to some of you but Fred really does manage to find a wonderful array of Oregon cheeses to pair with equally special Oregon craft beers. Add generous dollops of history and Fred’s personal stories and you have the makings of a great evening.

The 10 beer and cheese pairings sampled were:

Break for a cleansing glass of Rogue Spirits Spruce Gin

Is your mouth watering yet? Mine was as the wait staff circulated the room with trays of beer and cheese.

The room went quiet as Fred began to speak, “Why beer and cheese, and not wine?” he asked, “Well, let me quote this New York wine writer, who said that ‘wine and cheese is a train wreck in the mouth.’ Wine and cheese have nothing to do with each other, but beer and cheese are both simple, nutritious foods born of grain and nurtured by fermentation.”
Fred referred to the cheese and beer flowchart we’d been provided, which to my untrained eyes, showed they had exactly two things in common, grain and packaging. I guess you could see similarities in the process of each if you pulled back, way back, and looked at each process on the most basic terms. Truly, the only similarity between beer and cheese I’m really interested in is they both taste good, especially together. 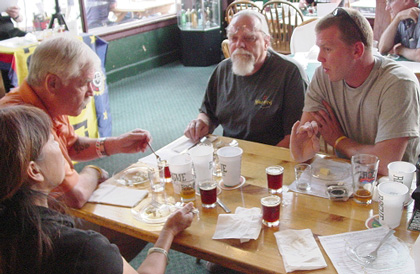 The volume in the room rose as we all sampled our first pairing, Roots Helles and Tillamook White Aged Cheddar. Next to the cheese on the plate were pretzels and apple slices. Fred instructed us to make a sandwich of the three, take a bite and munch it up and then take a sip of the Helles. Delicious! The sweet and salt worked together to bring out the hop character in the Helles.

“The milk of most mammals has been made into cheese,” he said,” even yaks, reindeer and manatee — though I have no idea at all how they milked the manatee.”

“Manatee’s have milk?” I wondered as my brain digested that little tidbit, “Who the heck…”

“But milk they did,” Fred continued as I strained my ears to hear more, “because manatee cheese was an ingredient in the baldness elixir that Sir Francis Drake brought back from the New World to the thinning-on-top Queen Elizabeth. Manatee cheese, mixed with rum and chewed tobacco, to be exact: After three weeks, the Queen decided it wasn’t working and She Was Not Amused. Sir Francis had to beat a hasty retreat to escape a death sentence … leaving me still wondering how you milk a manatee.” 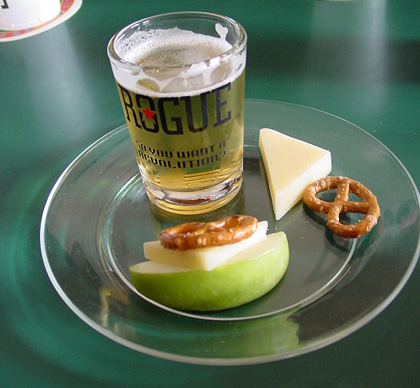 The wait staff swung into action and delivered the next pairing. It was getting harder to hear Fred as the noise level in the room began to drown out Fred’s microphone. Where’s a cattle prod when you need one?

The second pairing was Klamath Basin Golden Ale and Ancient Heritage Scio Feta. I’d never had Feta from sheep’s milk or Klamath’s Golden Ale before so I was eager to sample each separately and together. The Feta was wonderfully salty and firm. The Golden Ale light and mild. The combination…perfect.

I could hear Fred on and off with the ebb and flow of the crowd. 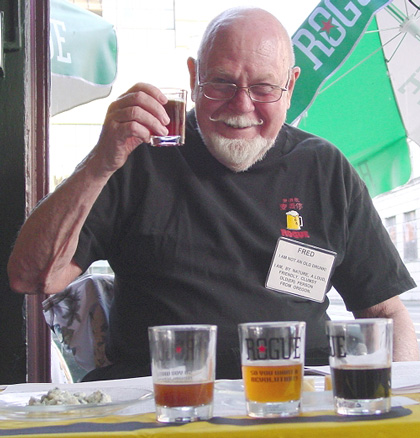 As the third pairing was delivered he rattled off the 7 types of cheese. Now the cheese guild describes them this way, “Fresh, Natural Rind, Soft White, Semi-Soft, Hard, Blue, and Flavored.” Here’s how I think I heard Fred describe them, “Unripe, Barely Ripe, Curds, Ripe, Ripened,” and something else I couldn’t quite make out. I tried to figure out where Tumalo Farms Pondhopper, paired with Dead Guy Ale, fit into that list. (Pondhopper turned out to be an aged goat cheese, infused with hop flowers and steeped in Oregon beer.) I didn’t taste the hops in the cheese but it was good and the pairing was excellent.
Fred continued to dish out beer trivia and cheese facts as more beer and cheese circulated the room. Rogue Hazelnut Brown Nectar paired and Monteillet Fresh Chevre. I love Hazelnut Brown Nectar but I’ve never been a big fan of soft white cheese. “What the heck,” I thought and dove in, “this is what we’re here for.”

The cheese had a very light taste and the texture of ice cream. When I took a sip of the Hazelnut Brown Ale they seemed to cancel each other out, leaving me with nothing but the texture of the cheese. Interesting, but I’d rather have the beer by itself.

As the fifth pairing was served the room had gotten pretty loud. I did catch a couple interesting things Fred said.

“I spent my 7th year on a goat farm – When you flunk 1st grade there’s hell to pay!” and “For those of you ladies who are interested, I will be conducting a tour of the men’s room after the last pairing…”

The pairing, Walking Man Knuckledragger Strong Ale and Willamette Valley Camembert arrived. The cheese had a thick rind with a soft cheese center the consistency of Velveeta. The cheese itself had a bitter finish, but when combined with the strong ale it seemed to cancel out much of the beer hop bite and bring out the sweetness of the malt. Not bad together, don’t think I’d eat the cheese alone though.

Time for a break! We were served Spruce Gin by Rogue Spirits to refresh our taste buds. Whew! It woke mine up. I’m not really a gin man but I could get used to this stuff. 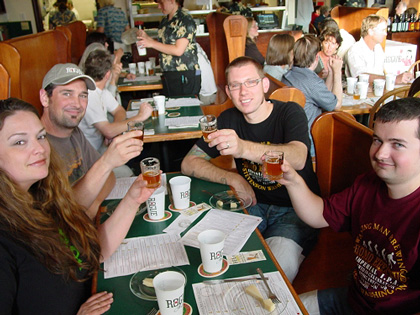 The seventh pairing, Eugene City Brewery Triple Jump Pale Ale and Juniper Grove Redmondo Goat Cheese was a bust. The ale was good, the cheese okay, but the combination did not make my mouth happy.

The eighth pairing, Issaquah Frosty Frog Spiced Smoke Beer and Rogue Creamery Spiced Chipotle Cheddar, made up for the previous and I found both delicious separately and excellent when combined.

With the ninth pairing Fred warned the group that anyone allergic to penicillin shouldn’t try the cheese. For some reason that didn’t set off alarms in my brain. Hair of the Dog Fred Strong Old Ale and Rogue Creamery Oregonzola were served. “Oregonzola? What the heck is Oregonzola?” I thought as I studied my sample. It sort of resembled blue cheese, and I hate blue cheese. I took a bite and found out it was indeed a form of blue cheese. Thank god I had a glass of beer to wash it down with…yuck! Sorry but as far as I am concerned, Blue cheese falls in the same taste category as liver, you either like it or hate it with a passion.

And so, when the final pairing of Rogue Olde Crustacean Barleywine Ale and Maytag Blue came around I politely offered my cheese to someone else and finished off the evening with the strong bite of Old Crustacean hops on my tongue. 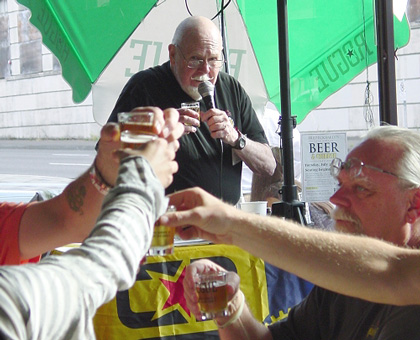 There was a vote at the end of the tasting. The Issaquah Frosty Frog Spiced Smoke Beer paired with Rogue Creamery Spiced Chipotle Cheddar received the most votes and was named best pairing of the evening.

As Fred conducted his tour of the men’s room for a giggling group of ladies, I thanked my host and left. It had been the perfect start for the busy week that is Oregon Brewer’s Festival, and I look forward to more Fred tastings in the future, next time I’ll sit closer, maybe Fred will divulge the secret of how they milked that doggone manatee.