Here’s something to think about next time you come across that rare $20 a bottle (usually 750ml) bottle of beer in the store.

For the first half of the year, for example, Chateau Mouton-Rothschild 1945 sold for an average of $63,000 a case, according to the Wine Spectator Auction Index. At the Acker Auction, however, a casually dressed man with a shaved head paid a startling $155,350 for the 12 bottles of lot 523 — a 69% increase over the 2006 first-half average. Barely a minute later, the same paddle also won lot 524, a case of six magnums (double size bottles) of the same wine. It also went for $155,350 (including a buyer’s premium of 19.5%). The next day, at Aulden Cellars–Sotheby’s New York sale, a case of Mouton-Rothschild 1945 sold for $161,325. That price, far beyond the range of most wine-buying mortals, seemed like a bargain compared to the all-time high prices fetched for the wine at the Christie’s Los Angeles auction in late September. There, a case of Mouton-Rothschild 1945 sold for $290,000, while a case of magnums of the same wine reached $345,000.

The good news, the story reports, is that the market has polarized and bargains are to be had at less than $500 a lot.

British brewer Adnams has produced a keg beer for the Punch Taverns chain.

Keg beer is much different than traditional cask-conditioned ale, also known as real Ale in the UK. This beer, 5% abv, is filtered and will be served on tap rather than through a traditional handpump or by gravity.

Jonathan Adnams told The Publican the launch of the beer, called Spindrift is in no way at the expense of the company’s cask ale portfolio.

“Adnams is dedicated to great cask conditioned beer. It is our bread and butter,” he said. “But this beer is for people who have made the decision not to drink cask beer. We are seeing an increasing area of the on-trade where retailers have decided that cask is a non-existent proposition. This is a great beer brewed in the Adnams way.” 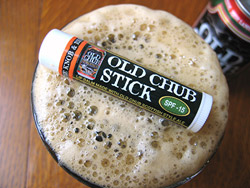 Based on research Oskar Blues Brewery in Colorado conducted nobody has ever made lip balm with beer and beer ingredients.

“Chub Stick” is made with an array of natural, moisturizing goodies (sweet almond oil, macadamia nut oil, beeswax, cocoa butter, chocolate and others), Old Chub Scottish-Style Ale and the malts and hops used to brew Old Chub. It offers SPF-15 protection and sells for $3 a tube.